All hits and misses are decided via /random roll. Before the match begins the opponents will /random, and the highest roller will write the first post.

The type of blow delivered is dependent on the attack roll and not the defense roll. This is to keep things simple and easy to interpret.

*When a character takes a medium or large blow it is mainly flavor text/points assignment. There will be no effect on future rolls, and they are not forced to take a large amount of damage IC.

Once per fight combatants are allowed to use a Power Up! This is OOCly declared prior to rolling and may be used offensively or defensively. A Power Up grants a one time +100 to your roll. This can cause medium or large blows when used in an attack if the roll + power up push the total into the appropriate bracket.

Please Note: Power Up rolls max out at 999 and will not go over.

In this screenshot, a power attack was the difference between a success and a failure. The power attack made her roll into a 101, which beat the 53.

Unlike standard Grindstone rules, a combatant may meet the win conditions in as few as 2 landed hits or as many as 4 landed hits.

Fights are scored in a 0/0/0 fashion, tracking each level of blow that each combatant has scored. Small/Medium/Large.

The most basic win condition is score 4 total of any kinds of blows against your opponent.

To end the match in less blows, you can meet the Heavy Hitter win condition.

Please note that additional small blow do not interrupt this win condition. Therefore, 1/1/1 and 1/0/2 are also valid. Earning a small between or before either of the heavier blows does not throw off the possibility of triggering this win condition. 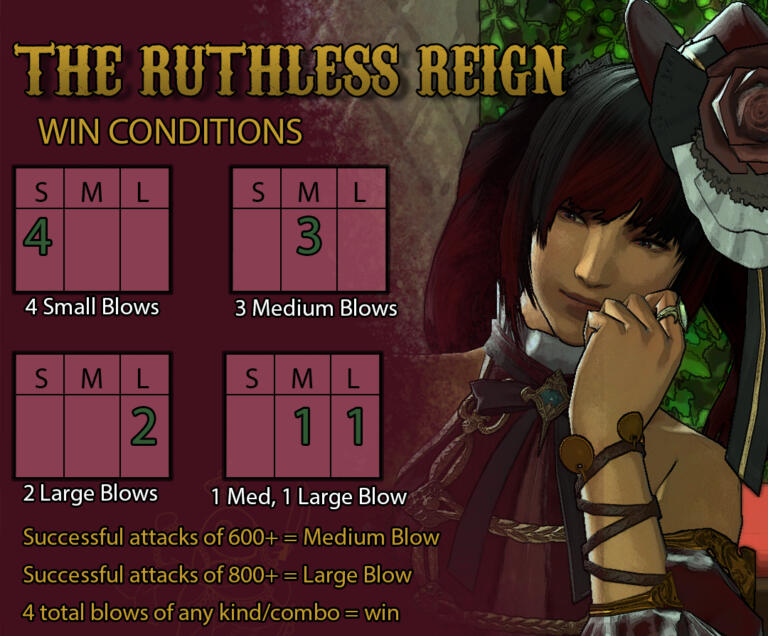 When four turns have passed without a blow being struck, the Judge will step in, making an announcement and tossing a token into the ring. The combatant who catches it will be awarded 1 small blow to their score.

In party chat (or another designated channel), the judge will call for a hold on posts. They will post into the match about tossing their token. Both fighters will then /random. Whichever fighter rolls highest will be awarded the point, and posts will continue where they left off, with in character acknowledgement of the token phase results rolled into their next posts.

Each fight will have a hard time limit of 25 minutes, or another designated amount of time specific to the event.

Once a fight hits the time limit, the fight will go into Sudden Death rounds.

When the fight’s timer hits 0, all attack posts will gain a +200 bonus beginning after the post that was in progress when the timer ran out. Each fighter will have a round with this bonus and then the bonus will grow:

Until a win condition is met.